Honest to god, I didn’t even see it since my back was to the sun. And I don’t really know where my head was at this morning because I forgot to take behind the scenes. Thank goodness for other photographers and models nearby for sneaking them in for me, haha!

Fun fact: the sand on this beach is super rocky and my knees are red and raw as hell from kneeling in the sand. Thankfully tho that’s the only thing that hurts this trip. Usually I get bug bites, cuts and bruises. Modeling is a tough gig!!!!!! 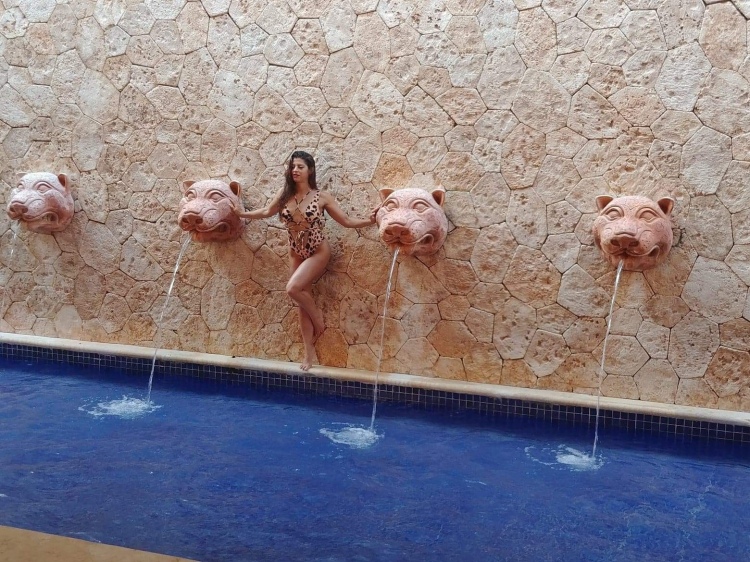 This morning went by too fast! I had 3 shoots in before 9:30! Didn’t realize how damn hungry I was until I got to the (good) buffet. I even ordered a Bloody Mary. Again, forgot to take pictures of my food before I started eating but I did remember to take one of my drink! LOL

After the daily 10am meeting I did one more shoot with a brand new and inexperience photographer. I didn’t want to because I knew it was gonna be a bit of a drag but I also want to “give back” to the modeling industry, in the sense that everyone deserves a chance. He was quite nervous and I could tell he didn’t want to disappoint me, knowing that I’ve shot with many of his idols so I decided to have fun with it. I wore a bikini with cherries on it and asked the bartender for some cherries to use as a prop. We had a lot of fun with it! And I got to eat cherries 😂 I honestly don’t expect to get fantastic photos but if we get one or two good ones I’ll be happy and I’m sure he will too! (Wish I got behind the scenes on that, sorry I have no idea where my head has been today!!!)

But that shoot gave me an awesome idea…. I’ve always wanted to do a shoot with an ice cream cone and I had just the perfect top! Problem was we (the entire IBMS group) had just been notified that we can no longer shoot on the resort property because some of the guests (non IBMS) has complained (aka over exaggerated) that some of the models were shooting inappropriate things. Whether or not it is true, it doesn’t matter. But that definitely puts a huge damper on the way the rest of this event is going to go. The only way we could do the ice cream shoot is if we did it in the hotel rooms so we decide to try it anyway. The photographer set up a black back drop while I ran to the buffet. I grabbed 2 cones but they were out of sprinkles so the combination of not being outside and not having sprinkles absolutely ruined my idea but we tried it anyway. The shoot was fun (because I was eating 2 ice cream cones!) but I don’t think I’m gonna like the photos at all. Who knows, I might be surprised!

As soon as I finished I immediately hit up the buffet for some real food and then headed back down to the pool because all I wanted to do was sit in the hammock with a drink in hand!!

I got my drink and snapped a picture but evened up getting in the pool with it and just CHILLED with some models, photographers and even makeup artists. And that lead to tequila shots (typical for IBMS!) and more drinks.

And now I’m currently sitting on a lounge chair, on my 3rd drink and really feeling relaxed for the first time. It’s only 6pm, and I have no idea what’s happening tonight but it’s Friday and I’m sure it’s gonna be one hell of a good time! I’ll fill ya in tomorrow, stay tuned!! 😘

And wish me luck 😂 I feel a hangover coming.

Those of you who know me know I very rarely behave like this but every now and then, it’s important to enjoy the moment – especially when you’ve worked so damn hard to get here!